Welcome to the Burning Eye! This short guide will give you some advice on creating a new character, what to take and what not to take, and suggested starting races and classes.

After you’ve picked your name, you’ll need to pick your race/class combo. Some races are better at certain classes than others, and additionally there are XP penalties for some race/class combos. For example, if you want to play a Beorning Cleric, it will cost you 50% more xp per level than a Dunedain Cleric would. It is a good idea to start with a character that has a low or no xp penalty. 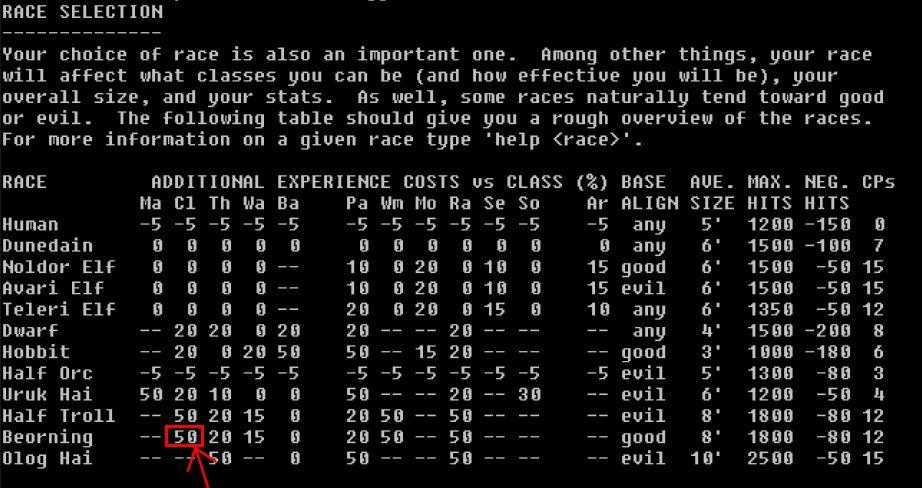 Notes:
“–” indicates this combo is not possible to create
CP – This column is the starting CP cost for the race
Base Align – This is fluid but you will regress to your base.
Find your Race/Class Combo on the grid to see if there is an XP Penalty. The classes are:

The following classes are good starting choices as they have an easier time leveling solo:

Ranger: Rangers do good physical damage, and their access to healing and curative spells is very useful for solo leveling. They also sneak around well and have access to a good invisibility spell in camouflage at level 26.
Suggested Races: Dunedain, Noldor/Avari

Clerics: Clerics are not quite as good of fighters as Rangers, but they have access to the blind spell and have more healing/curing power than Rangers. The blind spell and healing ability they have make them an excellent starting class choice.
Suggested Races: Dwarf, Noldor/Avari/Teleri, Dunedain

Paladins: Paladins are excellent fighters, and have access to healing and curing spells to keep themselves safe in the world. They fight better than Rangers, but don’t sneak around as well. They are another excellent starting class.
Suggested Races: Dunedain, Noldor/Avari

Warriors and Bashkars: These pure arms classes are not as ideal at solo leveling due to lacking as many heal and cure spells, but they are still decent choices as first characters.
Suggested Races Warrior: Dwarf, Half-Troll, Noldor/Avari, Dunedain
Suggested Races Bashkar: Olog-Hai, Beorning

The following classes should be avoided until you have spent a significant time getting to know the game and have a more thorough understanding of it, and are NOT recommended as a first character.

Mage: Mages lack any significant healing ability, have no direct skill or spell to blind, and are difficult to play well without more extensive knowledge of the world

Sorcerer: Like the other spellie classes, due to a lack of physical attacks Sorcerers only become more powerful later in the game (level 70+) so they are more difficult to level as a beginner.

Monk: While Monks do good physical damage, they have have slightly different build requirements than other physical damage dealers and a fair understanding of the world should be attained before trying this class.

Archmage: Archmagii are complicated to create, let alone play, and are NOT recommended as first characters. They are slow to level at first and take a long time to understand and play well.

Skills to take at creation for Hybrid Classes:

Skills to take at creation for Pure Arms Classes:

Skills to take depending on what kind of weapon/shield combo you want:

DO NOT TAKE THE FOLLOWING SKILLS AT CREATION:

Spell groups, if you’re under the 60-70 CP recommended cap, are up to your discretion. You will want the transportation group by level 20 and the protective group by mid 20’s on every character.

So go make your character! Have Fun! Explore! Die (it happens to everyone)! Keep the CP’s down and heed the advice above, and once you get in game, ask questions as much as you can! But most importantly: Have fun.